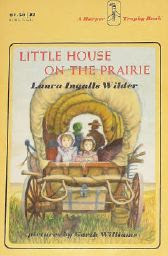 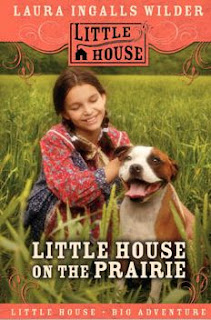 From Fuse #8, a link to the Publishers Weekly article, "Little House Under Renovation":

The prairie landscape of Laura Ingalls Wilder will soon be changing. HarperCollins, in an effort to keep the classic Little House on the Prairie series relevant to a new generation, is repackaging the paperback editions, and will replace the familiar covers by Garth Williams with photographic covers, and remove the inside art, starting in January. ...

...according to Tara Weikum, executive editor of HarperCollins Children's Books, sales of backlist properties in the competitive middle-grade market have been lagging. "For readers who view historical novels as old-fashioned," says Weikum, "this offers them an edition that dispels that notion and suggests that these books have all the great qualities of a novel set in a contemporary time."...

Kate Jackson, editor-in-chief at HarperCollins Children's Books, ... believes that Harper's responsibility is to keep the books "relevant and vibrant for kids today. A childhood book is an emotional, tactile object, and you want it to be as it was," she says. "But Laura Ingalls was a real little girl, not a made-up character. Using photographs highlights that these are not history but adventure books."

I had heard a bit about the changes afoot some time after I heard about the plans for Anne-before-Green Gables, and one has to think that the HarperCollins tag line "Come home to Little House" will probably be replaced too, no doubt with something more, erm, contemporary, relevant, vibrant, and adventurous.

I realize that Garth Williams wasn't the original illustrator of the Little House series. He was hired in the 1950's by Harper editor Ursula Nordstrom, who didn't think that the original illustrations, by Helen Sewell and Mildred Boyle beginning in 1932, suited the books; this page has an interesting comparison of the two styles, and I think an argument could be made that Williams's illustrations do have a, yes, vibrancy that Mrs. Sewell's lack, a vibrancy shared by the young Laura Ingalls herself. (Some might recollect Helen Sewell as the illustrator of two Alice Dalgliesh classics, The Thanksgiving Story and The Bears on Hemlock Mountain.)
Posted by Becky at 7:18 PM