There is no Frigate like a Book for summer holidays 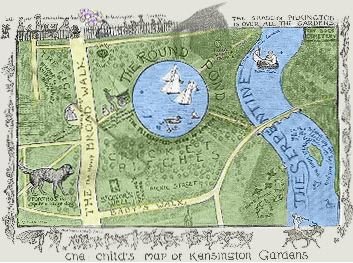 One of my favorite subcategories in children's literature are those books about the locations of favorite books and stories, and it occurs to me that it's a wonderful and particularly useful niche for this time of year, for those of us (like me) who won't travel too far from home this vacation season and also for those (maybe you) who might be more footloose and fancy free.

So, whether you're planning to spend your summer vacation at home, on the porch or under a favorite tree with a pitcher of lemonade and a stack of books, or whether you have a pin poised over the map and your travel agent on speed dial, here goes:

Heidi's Alp: One Family's Search for Storybook Europe by Christina Hardyment (published in 1987); I found this shortly after it was published, in my single days in a Washington, DC, independent bookshop, years before I met Tom and long before the kids were even glimmers in my eye, and was enchanted. A family with four daughters, ages five to 11, travels from their Oxford home in Bertha, the yellow camper van, through Hans Brinker's Holland, Hans Christian Andersen's Denmark and Germany, and searches for Pinocchio in Pisa, Babar in Burgundy, and, of course, Heidi's Alp. The first chapter, "The Life Adventurous," about how the trip came to be -- fell into place, really -- is marvelous and just as good as the adventures themselves that follow. Both lyrical and practical for anyone contemplating something similar.

Where Was Wonderland?: A Traveller's Guide to the Settings of Classic Children's Books by Frank Barrett, with lovely map illustrations by John Woodcock (published in 1997); I stumbled across this one at BookCloseouts the other year and have been delighted ever since. As Barrett writes in his foreward,

But while you may never find Neverland, you may be as surprised as I was to discover that the home of the Darling family is just a short walk from a London tube station. ...This discovery made me wonder how many other children's books had real-life locations.

The answer, as Barrett discovered and then shares with us, is a great many; included in the book, with excerpts and illustrations from the books themselves as well as the story of how each book (mostly British, with a few exceptions) came to be, are The 101 Dalmations, Watership Down, Thomas the Tank Engine, Lorna Doone, The Secret Garden, The Tales of Beatrix Potter, The Sheep-Pig (aka "Babe") by Dick King-Smith, The Railway Children, The Lion, the Witch and the Wardrobe, Rob Roy, Winnie-the-Pooh, Cider with Rosie, The Little Prince, Anne of Green Gables, Swallows and Amazons, and more. It's a fairly slim volume, just over 200 pages, and easy to pop in your suitcase.

Once Upon a Time in Great Britain: A Travel Guide to the Sights and Settings of Your Favorite Children's Stories by Melanie Wentz (published in 2002); this was another BookCloseouts treasure. Wentz, an American teacher, did much of the research while exploring England and Scotland with her family. While she covers some of the same ground as Frank Barrett (Watership Down, Thomas the Tank Engine, 101 Dalmations, Railway Children, Cider with Rosie, Swallows and Amazons, etc.), there are some different titles. As well, Wentz divvies up the titles into three sections, "Much-Loved Classic Stories," "More-Recent Favorites" (including Harry Potter), and "British Favorites for Americans to Enjoy". Lots of information for anyone headed across the pond. Curiously, though, the bibliography at the back doesn't include Barrett's book published five years earlier.

Storied City: A Children's Book Walking-Tour Guide to New York City by Leonard Marcus (published in 2003); this one came with us on the kids' first trip to visit Grandmama and Grandpapa in the fall of 2004. The book includes 21 walking tours through all five boroughs and features over 100 "places and spaces" from the obvious, such as the Plaza Hotel (Eloise) to the Metropolitan Museum of Art (From the Mixed-Up Files of Mrs. Basil E. Frankweiler), to the considerably less so (the Imagination Playground in Brooklyn's Prospect Park, where you can find the sculpture of Peter, Ezra Jack Keats's young protagonist from The Snowy Day, Whistle for Willie, and Peter's Chair). Since Davy was not quite four years old at the time and we had only two weeks and lots to see, we didn't use any of the walking tours as scripted, but used the book to help locate and learn more about the places and spaces we came across in our travels. The book was also especially handy in putting together a reading list of titles to help the kids prepare for their first ever trip to the Big Apple; I never would have come across The Park Book, written by Charlotte Zolotow and illustrated by H.A. Rey, otherwise. At 154 pages and about 4"x8", Storied City is a good fit for a jacket pocket or tote bag. Highly recommended, and I keep hoping that Mr. Marcus or a colleague will come up with something similar for, oh, say, Boston...

Here's another, one I haven't read, that popped up while I was writing this:

Storybook Travels: From Eloise's New York to Harry Potter's London, Visits to 30 of the Best-Loved Landmarks in Children's Literature by Colleen Dunn Bates and Susan La Tempa (published in 2002); includes some of the usual suspects as well as Brighty of the Grand Canyon and the France of Linnea in Monet's Garden.

And, because they're tangentially related to the subject of children's literature and might be nice for those families also sticking close to home this summer:

For the kiddies (best served with lemonade):

Storybook Parties: 45 Parties Based on Children's Favorite Stories by Penny Warner and Liya Lev Oertel; you can save these up for birthday parties, but so much better to trot out just for fun, for a tea party or a sunny day, or because you just inflated the kiddies' pool or finished reading If You Give a Mouse a Cookie and want the fun to continue. Lots of fun for the younger set.

Plays Children Love: A Treasury of Contemporary and Classic Plays for Children, volume II, edited by Coleman A. Jennings and Aurand Harris; we don't have volume I, but volume II includes Charlotte's Web, The Bremen Town Musicians, How the Camel Got His Hump, Pyramus and Thisbe, The Three Little Kittens, and oodles more.

For the adults (best served with iced coffee, iced tea, or a G&T):

Don't Tell the Grown-Ups: The Subversive Power of Children's Literature, also by Alison Lurie
Posted by Becky at 9:05 PM