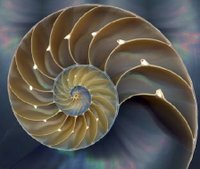 Gregory at GottaBook has invented a new literary art form: the Fib. Similar to haiku, but more precise. In fact, precisely

a six line, 20 syllable poem with a syllable count by line of 1/1/2/3/5/8 – the classic Fibonacci sequence. In short, start with 0 and 1, add them together to get your next number, then keep adding the last two numbers together for your next one. It’s a wonderful sequence, and it’s one that is repeated in nature (most famously in nautilus shells). Heck, some folks use it in knitting and music.

Heck, since I'm apparently the only non-knitting blogging homeschool mama around, and can't play (or, heavens, write) music, Fibs it is:

Farm
school:
kids and
livestock too
books music movies
and sometimes just a pinch of snark.

First effort, not much thought, not great, but great fun. In fact, it occurs to me that Fibs are the perfect writing exercise for home educated kids, or any kid you might happen to have around the house, especially the younger ones who a) might not like to write overly much and b) are only just learning about syllables and such. So I told my kids about Fibs earlier in the week and here are a couple of novice efforts:

Cat
Sun
Lying
On the deck
Curled up, tail wrapped 'round
I think she's having lots of fun
(Laura, who is also trying her hand at a Fib where the first letters of each line, read vertically, spell a word. Unless she goes nuts trying.)

And Davy's, not a proper effort, but culled from one of his conversations,

For more fibberosity, check all the GottaBook entries since that first one (and don't miss the comments section -- up to 165 items at last count, most of them Fibs), especially this one with the rules and guidelines.

Many, many thanks to Gregory for this terrific new art form (it's not often I get to say that. Heck, it's not often I'm on a first-name basis with such an artist/inventor type). What are you waiting for? Go Fib!


UPDATE: The Fib fun has spiralled...all the way into last week's New York Times (you need to be registered, which is free; or you can use Bug Me Not)
Posted by Becky at 10:20 PM