On the eleventh day of Christmas

my true love gave to me,

And a few of their friends, 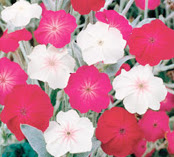 You might know them as Rose campion (Lychnis coronaria) "Dancing Ladies", because they look like little swaying dancers in brightly-colored ballgowns. Especially if you are in the garden early in the morning before that first cup of coffee and without your glasses.

The picture above is from the online catalogue of Johnny's Selected Seeds in Maine, which offers a great variety, including organic and heirloom seed. Imagine a whole garden full of dancing ladies, for the bargain price of $1.80 -- the cost of a packet of seed.

This is the season gardeners love, planning the new year's garden while snow is still on the ground. For me this involves stacks of printed gardening catalogues (and no, it's just not the same online, though I do request them by email), a pen, Post-It notes, and a graph paper pad filched from Tom.

This recent Sioux City Journal newspaper article includes a number of good US seed and plant houses to contact for catalogues.

I'll leave the last word to Katharine S. White, E.B. White's wife, an editor at The New Yorker, and ardent and opinionated gardener. After she retired from her editing duties, in the late 1950s, she began a series of garden pieces for the magazine. More than a few columns were reviews seed and nursery catalogues, which Mrs. White considered as seriously as any other American literature. After Mrs. White's death in 1977, her husband collected them into a delightful volume, Onward and Upward in the Garden. From her first piece, dated March 1, 1958,

For gardeners this is the season of lists and callow hopefulness; hundreds of thousands of bewitched readers are poring over their catalogues, making lists for their seed and plant orders, and dreaming their dreams. It is the season, too, when the amateur gardener like myself marvels or grumbles at the achievements of the hybridizers and frets over the idiosyncrasies of the editors and writers who get up the catalogues. They are as individualistic -- these editors and writers -- as any Faulkner or Hemingway, and they can be just as frustrating or rewarding. They have an audience equal to the most popular novelist's, and a handful of them are stylists of some note. Even the catalogues with which no man can be associated seem to have personalities of their own.

Before we examine the writers and editors, let us consider the hybridizers, and the horticulturists in general. Their slogan is not only "Bigger and Better" but "Change" -- change for the sake of change, it seems. Say you have a nice flower like the zinnia -- clean-cut, of interesting, positive form, with formal petals that are so neatly and cunningly put together, and with colors so subtle yet clear, that they have always been the delight of the still-life artist. Then look at the W. Atlee Burpee and the Joseph Harris Company catalogues and see what the seedsmen are doing to zinnias. Burpee, this year, devotes its inside front cover to full-color pictures of its Giant Hybrid Zinnias, which look exactly like great shaggy chrysanthemums. Now, I like chrysanthemums, but why should zinnias be made to look like them?

By the way, any Katharine White fans who have despaired of ever reading more of her garden writings would be very happy with Emily Herring Wilson's 2003 compilation, Two Gardeners: A Friendship in Letters, Katharine S. White & Elizabeth Lawrence, the latter a talented and prolific garden writer.
Posted by Becky at 4:48 PM