Poetry Friday: the week that was 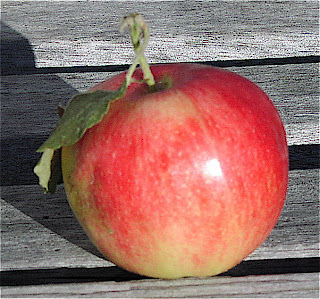 Harvest started this week with swathing (cutting the crops -- the row they fall in is called a swath), and the first killing frost arrived Wednesday night. The second one, last night, and the furnace kicked in for good measure. Goodbye tomatoes, cosmos, and zinnias, and hello, happy pantry and busy days. Or busy pantry and happy days. My week in numbers:

Poem for Poetry Friday: one, and it's a short (anonymous) one:

There was once a young lady of Ryde
Who ate a green apple and died;
The apple fermented
Inside the lamented,
And made cider inside her her inside.

A maiden caught stealing a dahlia,
Said, "Oh, you shan't tell on me, shahlia?"
But the florist was hot,
And he said, "Like as not
They'll send you to jail, you bad gahlia."

The rest of my week in numbers:

Apples and crab apples picked in the past week: 15 boxes

Cider we pressed ourselves the other night on the deck: 16 four-liter pails, stored away in the deep-freeze

Vases full of cut flowers from the garden while I can still enjoy them: eight

Boxes of tomatoes in my kitchen: three, one with green tomatoes, one with red ones, and one half-and-half, on the way to red, one last big box picked before the first frost.

Remaining cucumbers and zucchini left on the vines, discovered before the frost: one each.

Pumpkins we are trying to keep warm and growing: three

Number of meals featuring freshly picked or somehow preserved apples and/or tomatoes and/or berries: all of 'em

Enormous "Farmer Boy"-style meals prepared to feed the swathing crew, around the kitchen table and hauled to the field to be eaten as a tailgate supper: three

Evening meetings out of the house: two, last night and tonight.

"Nice Matters" award from Frankie at Kitchen-Table Learners: one, which made my week. Thanks, dear. It's always nice to be nice, especially when people in town seem to be giving you sidelong glances because your fingernails look black (but are really stained from chokecherry juice) and your palms are green and smell funny (from picking tomatoes), no matter how hard you scrubbed with the nail brush and half a cut lemon.