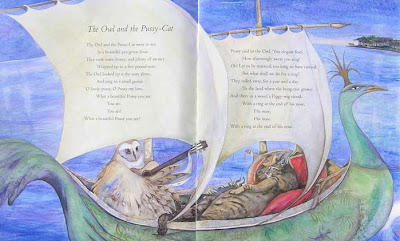 Ah, but a man's reach should exceed his grasp,
Or what's a heaven for?

Or what's a poem for?

On the heels of my guest review at Chicken Spaghetti of The Barefoot Book of Classic Poems, I'm still agitating and cogitating about the book, a wonderful and luminous volume I thought -- heck, my kids thought -- was one of the best children's poetry books of 2006 and yet failed to make it into the top five of the Cybils poetry titles. Go figure. I'm still trying.

In fact, for some time now I've been trying to figure out the current politics of poetry for children, which nowadays means that most folks aren't interested, or think that children won't be interested, in poems that aren't "relevant", "accessible", or scatalogical. Admittedly, to many children and parents, the idea of poetry, especially the classic variety, is about as welcome as the thought of a plate full of broccoli (unless, of course, you figure that both are just an acquired taste, and the thing to do with your kids is to start acquiring those tastes while having fun, which isn't particularly sneaky, mean, or difficult). And the fact that some of the poems and poets in The Barefoot Book aren't usually found in children's books, or that some of the authors could be considered "dead white males" will no doubt cause some parents, especially those who tend to underestimate the little dears and their abilities, to gnash their teeth and grumble.

But as I learned a few years ago during Laura's brief foray into public education, just before we started home schooling, it's a mistake and a terrible disservice to children to underestimate them, or to foist on them one's own prejudices, against either Auden or eggs. I've long taken inspiration from the educational philosophy of Marva Collins, who believes that children are naturally ambitious and rise to a challenge; and I've been heartened recently to read both author Mitali Perkins's fond remembrance of Wordsworth and my friend JoVE's post on Accessible Poetry, about modern children and classic works. The vocabulary and exact meaning of some lines may not always be obvious to children, and yet the rhythm and poetry still speak to them. When children are older, they'll already be familiar with some of the great writers and great books, greeting the original works as old friends rather than viewing them with fear or displeasure. And as adults, they'll be able to join in the Great Conversation, as educational philosophers Robert Maynard Hutchins and Mortimer Adler called it, rather than just joining in the latest gossip. In a 1970 interview, Hutchins said,

[I]t seemed to me that the Great Books were the most promising avenue to liberal education if only because they are teacher-proof. If there were a Socrates behind every teacher's desk, you would not need to worry about the curriculum. ... I am sorry to repeat that the striking thing about young people today is that they are frightfully ignorant of the past. I don't see how this can ever be an advantage. I understand the advantages of innocence but I do not understand the advantages of ignorance. ... They are ignorant of the fact that there is a Great Conversation echoing back through history on the subject of justice. You are quite right that they are not ignorant in the sense that they do not lack information. They have more information than any previous generation, but having a great deal of information has little to do with knowledge. Knowledge is organized information, and an institution pursuing knowledge is not simply trying to hand out the latest dope on everything; it is trying to put this current information into a context of ideas that can be useful for analyzing the problems of daily life.

While some of my Cybils colleagues had concerns that the poetry in the book is too "old" to be suitable for kids, I tend to consider poems ageless, as I wrote in a post to the group. I don't really think of Edward Lear and Lewis Carroll as children's poets (I remember a surprising and glorious English class in 11th grade studying Alice) or "A Child's Garden of Verses" as children's poetry -- the latter, in fact, seems to speak to me more now that I have children of my own -- any more than I think of Yeats and Emerson as poets for adults. So I was happy to reread recently Harold Bloom's introduction to his Stories and Poems for Extremely Intelligent Children of Ages:

...I do not accept the category of "Children's Literature," which had some use and distinction a century ago, but now all too often is a mask for the dumbing-down that is destroying our literary culture. Most of what is commercially offered as children's literature would be inadequate fare for any reader of any age at any time. I myself first read nearly everything I have gathered together in this book between the ages of five and fifteen, and I have gone on reading these stories and poems from fifteen to seventy. My title is meant to be precise: What is between these covers is for extremely intelligent children of all ages. Rudyard Kipling, Lewis Carroll, and Edward Lear are blended with Nathaniel Hawthorne, Nicolai Gogol, and Ivan Turgenev, because all of them -- in the poems and stories I have chosen -- make themselves open to authentic readers of any age. There is nothing here that is difficult or obscure, nothing that will not both illuminate and entertain. If anyone finds a work here that does not yield immediately to their understanding, I would urge them to persevere. It is by extending oneself, by exercising some capacity previously unused that you come to a better knowledge of your own potential [emphasis mine].

As I wrote in our panel discussions, and I have a feeling my impassioned pleas for The Barefoot Book went well beyond mere discussion (though my fellow panelists are a forgiving bunch), I'm not quite sure when "classic" became a pejorative term or started to mean only heavy, serious, somber works. I've always understood the word to mean something -- whether art, music, movies, or literature -- that has stood the test of time and avoided the faddish, and informed an understanding of the human condition, and children are very, very human. The Barefoot Book of Classic Poems is genuinely a book to grow with, with a wide range of poetry and a variety of voices to appeal to children of all ages, abilities and interests, the sort of book a son or daughter might take along when it's time to leave home, not just because it contains sentimental old favorites from childhood, but because the poems in the book still have things to say, and explain, to the reader. Carol Ann Duffy, one of England's most popular living poets, writes in her introduction to the anthology, "The poems here are 'classic' because, although their authors are no longer living, they continue to shine brightly in the English language -- true stars. ... Poetry, of all the arts, offers us moments in language that preserve or celebrate, explore or elegize, transform or enhance our human joys and sadnesses."

Her words remind me of William Faulkner's when he collected his Nobel Prize for literature: "The poet's, the writer's, duty is to write about these things. It is his privilege to help man endure by lifting his heart, by reminding him of the courage and honor and hope and pride and compassion and pity and sacrifice which have been the glory of his past. The poet's voice need not merely be the record of man, it can be one of the props, the pillars to help him endure and prevail." Which is why I think there must be room for classic poetry, especially glorious collections like The Barefoot Book of Classic Poems, in the lives of children, too. Especially in the lives of children. But do them a favor. Don't just give them the book. Sit down and read it to them, with them, and let them read aloud to you and each other, too. That's how classic poetry lovers, and sometimes even poets, are born.
Posted by Becky at 6:55 PM