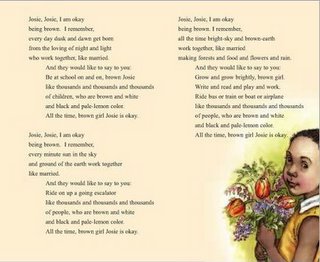 On the way out of Toronto last month, I was gifted by the airport hotel with the Sunday New York Times, where in the Book Review section I was even more thrilled to find a tiny mention of the new book and cd set, Poetry Speaks to Children, edited by Elise Paschen.

We're big fans of the original, Poetry Speaks, subtitled "Hear Great Poets Read Their Work from Tennyson to Plath," which is best not really for the book but for the three accompanying cds, on which you can actually listen to Tennyson, Browning, Yeats, Eliot and more than 30 other celebrated poets recite their works. Or, as kids in this house have been know to say, "That's what I thought he would sound like!" Tennyson's reading of The Charge of the Light Brigade makes my toes tingle, and when Carl Sandburg speaks you can hear a pin drop in our kitchen, which doesn't happen often. As my kids are learning, poetry (and plays) should be heard and not read.

Poetry Speaks to Children's book has 97 selections, from classic to contemporary, and is apparently profusely illustrated. The cd contains 52 poems read by 36 poets and artists, including such goodies as J.R.R. Tolkien reciting Frodo's Song in Bree from The Fellowship of the Ring; Robert Frost and his Stopping By Woods on a Snowy Evening; Basil Rathbone (aka Sherlock Holmes) reading Edgar Allen Poe; what I have heard is a lyrical telling by Jamaican-born James Berry's Okay, Brown Girl, Okay*, and -- well worth repeating from the original version -- Langston Hughes's moving The Negro Speaks of Rivers.

With a lineup like that, I'm willing to overlook what seems like pretty goofy cover art, a few apparently equally goofy poetry choices, and, grrr, the fact that the kid's version comes with only one cd rather than three. And, at under $14 US, you Americans are getting a deal.

*If these books whet your appetite, or if your library's waiting list is too long, or if even $14 is too much (so many books, so little money), then you'll be even more excited by the gem that is the UK Poetry Archive website -- the world's premier online collection of recordings of poets reading their work. The Archive includes sections for teachers, students, and a special Children's Archive. A heartfelt thank you to everyone before and behind the scenes at the archive, the brainchild of UK poet laureate Andrew Motion and recording producer Richard Carrington with boosts from former US poet laureate/New York State Poet Billy Collins, poet Seamus Heaney, and writer Melvyn Bragg.
Posted by Becky at 9:19 PM