The beautiful basics of science 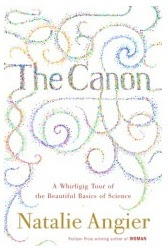 Listening to CBC radio while working in the garden last week, I heard an interview with Pulitzer Prize-winning New York Times science reporter Natalie Angier about her new book, The Canon: A Whirligig Tour of the Beautiful Basics of Science, which sounds very worthwhile. I take most Amazon reviews with a grain of salt, but I'm intrigued by the reviewer who called Canon "a prose-poem of science", which reminds me that the new book is also available unabridged on audio CD.

A transcript of the CBC interview isn't online, but I found this interview from yesterday's Boston Globe. From which:

IDEAS: What was your goal with "The Canon"?

ANGIER: In order to follow science, even in the newspapers, you have to have some confidence that you get the basic lay of the land, the geography of the scientific continent. I was trying to convey the basic ideas behind scientific thinking in a way people would understand.

IDEAS: Is there any special reason why Americans are poorly educated in science?

ANGIER: Our obsession with money plays into it. I think there is some truth to David Baltimore's observation that people used to making a lot of money don't get that interested in science, science being a sort of blue-collar profession that requires a lot of hands-on work and that is probably not going to make you rich.